I first realized I needed kneepads when we went to Rodellar in the autumn of 2009. I really loved climbing on tufas and each day I was finding more and more ways to use my knees. We observed that most of the experienced climbers wore neoprene pads under their pants. We didn’t have anything suitable and while strolled about Decathlon, Yavor found some gardening kneepads. These became our armour in tufa climbing.

In the autumn of 2010 I tried King Kong (8a, Ribaritsa). That route has a crucial no hands rest with very good, but painfull knee bar. Then some endurance climbing follows along two tufa lines. I invented a brilliant way to climb these, wedging a knee in almost each move. To be able to climb, I’d take Yavor’s kneepads but that was awkward: he’d either need them, or I’d forget to call him on Friday. I decided to make a pair of my own. That is how the first model came along. I cut the legs off a pair of jeans, I found some pieces of a leather jacket of my mother’s, and I decided these were the best materials to make the knee bar pads. Later that autumn I managed to climb King Kong. Unfortunately, the leather was not so strong and was torn. It was time for the next model to appear.

I was compelled to make a new kneepad when I invented a key knee jam in the roof of Paranoya (8b, the Small Cave). This time I wanted to use rubber. A friend of mine gave me some from an inner motorcycle tire. I had to decide what to fix it to. I made two models: one with thinner fabric and one with thicker cloth. For the first model, I glued the rubber on a medical kneepad, and for the second one, on neoprene. I began climbing Paranoya with these knee bar pads but to put them on was real pain: pulling the kneepad, pulling the pants’ legs, it exhausted you before you started. These models were, obviously, too unsatisfying.

That is how the fourth model appeared: a piece of cloth with some rubber above, fastened with buckles. I bought special rubber and cloth. I made, at first, the Go Climbing Knee bar pad prototype. And after several modifications, the original model was ready. 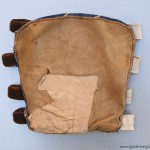 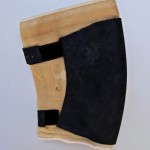 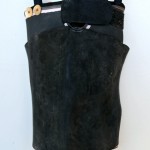 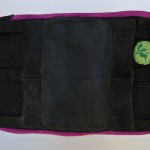 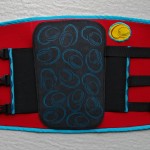 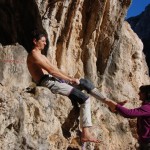 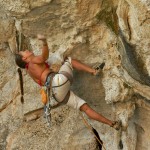 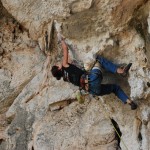 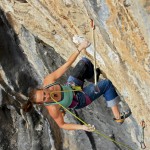 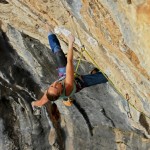