Ida Posted on May 15, 2018 Posted in Uncategorized No Comments 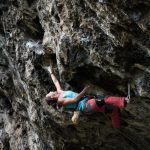 Paranoia is the name of a route located on one of the most popular spot for sport climbing in Bulgaria –  Small cave, Vratsa. It goes through the most overhanging part of the sector. The crux is in the roof, followed by a very good no hand rest with a knee bar and the second crux comes as a reward. It is a slightly overhanging slab with risky movements where it is not surprising to fall. The grade is 8b.

I first tried Paranoia in the spring of 2012. Some friends climbing Pranoia and I decidet to try it with them. I couldn’t do their variants to the crux in the roof, and I was forced to find my way to use the holds with a lot of knee bars. In the process of climbing I found that the knee pads I have aren’t the best weapon. The first thing that hindered me was that they were very difficult to put up and I realized that I spent more time putting knee pads than climbing. This gave me a motive to think of a model of a knee pad that can be easily put on and pull off. So the first modifisation of Danaë knee bar pad appeared. Then I realized that for a very key knee bar, just in the middle of the roof, I needed a knee pad that I could put as close as possible to the knee. Those, that I have did not working – either they stood too high, or dropped, or were very thick and trubled the knee bar. It was time for Perseus knee bar pad to come on the scene. Unfortunately, all of these improvements were not enough at all, and I kept falling. Crunches with weight, pull-ups, climbing the route to unconsciousness, regardless of the conditions… So I spend next four years like that. Mentally I couldn’t sustain to fall almost every time on the same move, and I stoped climbing Paranoia.

This spring I found myself again at the Little cave, and I decided to check if Paranoia’s movements had become easier. At first I did not see any difference, some things I had forgotten, I had lost the sense of movement, but soon I began to get used to it. I did a few good attempt and I motivated again. What comes around, goes around and alas where I fell, I will fall again. That was the situation at one point. After a steady siege, I did the roof. The test after, was really very good, but I fell on the second crux. Paranoia remained a project. The next day I was not satisfied with climbing, and I decided I was tired. On the third day, after the warm-up I decided to try again, without expectations, just to see how many moves I can do. And I did it! I climb the roof and while I has resting, I realized, that I couldn’t affort to fall again from the second crux.

I do not think the four years in which I have mostly climbed Paranoia, are lost time. They’ve taught me a lot of things, I’ve done a lot of improvements on the knee pads, new models have come up.

Thanks to Sava Chapanov for the photos and to Joanna Ivanova for the video!

This site uses Akismet to reduce spam. Learn how your comment data is processed.